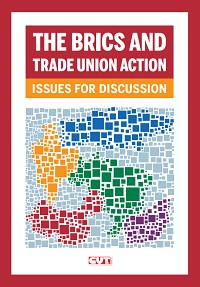 The BRICS and Trade Union Action Issues for discussion

The 6th Summit of Heads of State and Government of BRICS (Brazil, Russia, India, China, and South Africa), held in Brazil, launches the second cycle of high level meetings of this bloc of countries. Since it appeared in 2001, as a concept linked to the financial market, which at that time underscored the growing weight of the so-called emerging economies of the BRIC (then still without the inclusion of South Africa), a steady process of coordination between these countries was established. According to the market view that gave rise to the term, BRIC was solely an economic, and not political, group because of the great heterogeneity of its members.

At the governmental level, however, the development of new diplomatic concepts and strategies was already being envisaged by some of these governments translated into intergovernmental mechanisms like the IBSA (India, Brazil, and South Africa) and the BASIC (Brazil, South Africa, India, and China). We may say that, at least in the case of Brazil, since 2002 the Brazilian government was already trying to step up its relations with several countries in Africa (through the opening of new embassies), and with China and Russia, with the aim of build ing new trade and development strategies that did not rely so much on the United States-European Union-Japan axis.

The adhesion of South Africa to the bloc in 2011 was the turning point for the financial market’s economically-biased perspective, since from a strictly economic point of view South Africa is not at the same level as the other BRIC countries. South Africa’s adhesion signaled a clear political position toward the creation of a new South-South counter-power axis, boosting the BRICS political and geographic representation before the other countries of the Global South, as the BRICS established a much closer relation with the African Continent.

While the political coordination between the member countries increased somewhat rapidly, intra-BRICS trade flows are still relatively low today, with a clear prevalence of each of its member’s trade with China. The fact that this flow is low is one of the main arguments used, especially by the big media, to criticize the BRICS. Yet, it is worth highlighting that, as trade financing and science and technology exchange, direct cooperation, mechanisms are set in place, this setting is bound to change.

Even though relations between its members is often analyzed through a lens that magnifies the group’s heterogeneity and just as it casts a doubt over its capacity to keep political cohesion over and beyond piecemeal shared economic interests, the five governments have been steadily moving ahead on several fronts since 2009. The key arenas of BRICS intergovernmental coordination have been the Bretton Woods multilateral organizations (IMF, World Bank, UN), the G20 and the WTO. On the climate change issue there is some degree of coordinated action between BASIC countries.

The drivers of this coordinated action are, in the first place, the fact that to-date in institutions like the International Monetary Fund (IMF) eleven developed countries alone have more voting power than the 100-plus other member countries, the BRICS included, thus managing to keep frozen a port-World War II global order into the 21st century. Secondly, there is the perception that these economies are too big to keep on being dismissed in the world-economy policy-making.

It is worth noting that in important negotiation arenas and multilateral discussions the BRICS countries, as leaders in their regions, are also likely to represent some of the interests and points of view of their regional neighbors, at the G20, for example, even if not officially vested with any mandate. In this regard, the BRICS represent an important political counterpoint and a strategic reference for countries with less geopolitical weight.

Still, if multilaterally the present correlation of forces prompts these countries to coordinate their actions, as we shall see in this study, the productive structure of the BRICS is very different from country to country. Russia stands out mainly for its energy, oil, and gas production; Brazil, for the strength of its agriculture and natural resources; China, for the power of its industrial park and huge labor force; India, for the quality of its IT and telecommunications services; and South Africa, for its mineral reserves. Many analysts view this diversity as a weakness; yet, counter to such analyses, increasing intra-BRICS cooperation has become one of the bloc’s most striking features.

In this regard, several negotiations are under way at different stages. Among these four economic projects are worthy of special consideration by the workers:

These strictly economic measures mirror the post-2008 crisis moment, which opened up new political spaces and underscored the need for new arrangements. The BRICS, in the context of the crisis, introduces in the political setting a discussion about a new international political/economic institutionality. If up to the present moment the G20 has failed in promoting significant changes with regard to financial instability, this does not change the core of the political struggle, which is still about the roadmap to be adopted that will lead us out of the crisis. The austerity policies presently being implemented in Europe, for example, do not resonate with the BRICS.

When we focus on the labor movement within the BRICS, it is worth recalling that their workers were hard hit by the productive restructuring and the neoliberal policies of the 1980s and 1990s, except for China, just like the workers in the developed and developing countries that embraced the Washington Consensus. The appearance of new technologies that could have led to improved quality of life for the workers was, on the contrary, used to intensify labor productivity, causing more unemployment and often promoting the dismantling of the State, public services, and social protection systems, especially via WTO services agreements. Privatization and outsourcing/subcontracting policies, plus curtailment of labor rights, measures often imposed through conditionalities embedded in the IMF and World Bank loans, characterized this period.

Especially in the case of Brazil and South Africa, if compared with the other BRICS members, there is yet another key issue: the great power of the developed countries’ transnational corporations within these national economies, implying that many strategic decisions on investments, technology, trade, and on how to organize production chains, among others, are taken abroad and respond to political and economic interests without any concern for the local working class.

With regard to participation and social dialogue, doubts still linger as to what the relation between the BRICS and civil society and the workers will be. Historically, there is no doubt that the Bretton Woods organizations are extremely hostile to this kind of dialogue. If the BRICS are intended as a bloc that is politically diverse from the arrangements we have witnessed so far, more transparency and social participation are critical elements to be pursued. The already consolidated opening up for participation of academic and business sectors must, from now on, be deepened with the creation of an official space for embedding the BRICS workers, thus furthering the bloc’s internal democracy.

We, workers of the BRICS countries, through our national trade union centers, are posed with at least four challenges in this process:

The progress we have made so far cannot be underrated. Now we have arrived at the 3rd BRICS Trade Union Forum with unity-driven actions and a document, plus a better mutual understanding of our trade union centers than we had a couple of years ago. Still, we can advance much more. The demand for an official labor participation space in the BRICS will surely provide us with a common platform of understanding, which, once consolidated, will open up new prospects for the deepening of our relations in the near future.

We must work together so that the BRICS does not become yet another international initiative that fails to listen to the workers. On the contrary, we are fully convinced that that with our active participation in and specialized contribution to the debate regarding the development of the BRICS countries we will be able to help build a bloc that does actually represent a sustainable development model, socially just, and a counter-hegemonic alternative to the problematic international order in place since the post-war period.

With the support of Friedrich Ebert Stiftung (FES), we submit this study as a contribution by CUT Brazil to the process of rapprochement involving the BRICS national trade union centers and in the understanding that the better we know each other, the better our joint political action will be.

Report by Mr. Anton Kotyakov, Minister of Labour and Social Protection of the Russian Federation

The BRICS and Trade Union Action Issues for discussion