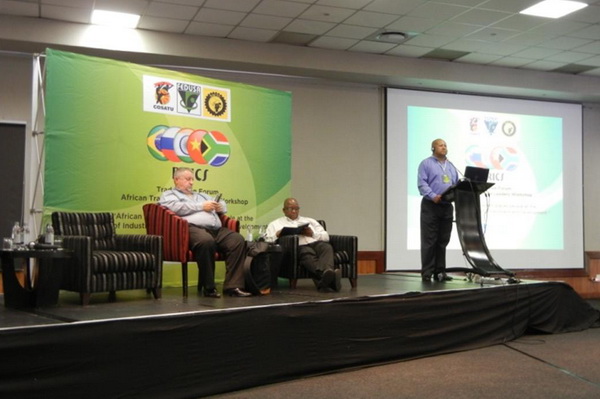 Apart from the interventions made by the delegates from BRICS, the African countries and international organizations, considerable attention of the audience was drawn to the keynote address by Mr. Dave Malcomson, Chief Director of the Department of International Relations of South Africa, who outlined general approach to the future presidency of his country in BRICS in 2018.

Of particular interest for the participants was the presentation made by Prof. Patrick Bond, Professor of Political Economy at the University of Witwatersrand School of Governance (Johannesburg), which focused on the review and analysis of all the Declarations adopted by BRICS Trade Union Forum throughout the entire period of its existence, including in the context of the Declarations adopted by the BRICS leaders’ summits. His work on systematization and analysis of BRICS documents deserves close attention.

The ACFTU delegate reported on the two events with participation of trade unions that are being planned under the Chinese presidency in BRICS during 2017: the Labour and Employment Ministers’ Meeting in June with the Working Group on Employment meeting to be held on its sidelines (city of Guiyang, Guizhou Province), and BRICS leaders’ summit in September (city of Xiamen, Fujian province). As regards the time and venue of the 5th BRICS Trade Union Forum, the Chinese delegation informed that the coordination of that event was still in progress.