The CTB (Central of Male and Female Workers of Brazil) was founded in a National Congress of Trade Unions held on December 12-14, 2007 in Belo Horizonte, in Minas Gerais State with the participation of 1,300 trade union leaders from almost all the Brazilian States and representing more than 500 organisations.

The CTB is the result of an initiative on the part of trade unionists from different schools of thought and independent leaders as well. At its creation, the CTB already had a significant representation in the private and public sectors, with membership in main rural workers´ federations and unions and a prominent presence in the metallurgical, maritime, trade, construction, education, urban, transportation, services, finance, civil services, and postal industries.

Today, it is one of the most representative trade union centrals of Latin America, being the third largest in the country according to the Ministry of Labour with about of 1200 affiliated entities. 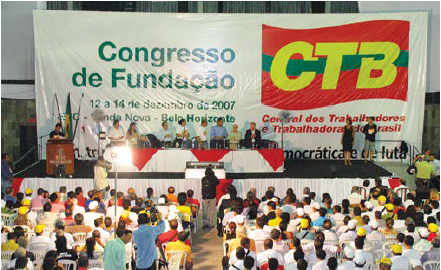 The CTB was born at a time of change and transition in Latin America, animated by the spirit of class struggle that crosses the modern history, an epopee of achievements and progress towards humanization of social relations, national liberation and the struggle against capitalism, imperialism and neo-colonialism.

The CTB was born at a time when the international capitalism in crisis, led by imperialist powers under the influence of the neoliberal ideology, aims to undermine Labour Laws and all the progress in human relations won through social struggle.

The CTB was founded to stand up against this reactionary, yet disguised as “postmodern” and “post-industrial”, offensive, to defend social rights and democracy in alliance with all progressive forces in our society, and to raise the banners of labour valorisation and socialism.

It was born as a class-oriented, democratic, internationalist and plural union central, committed to:

We defend trade union freedom and autonomy; we want our organisations to be free and independent from employers, governments, religious beliefs and political parties in defining their goals and campaigns and in the struggle for social transformation.

The CTB should promote the values of class solidarity at the local, national and international level, in opposition to the predatory individualism propagated as the supreme virtue by the capitalist competition and neo-liberalism.

At its founding congress, the CTB decided to affiliate with the World Federation of Trade Unions (WFTU), a global trade union central undergoing a reorganisation process, based on anti-capitalist, anti-imperialist and class-oriented concepts within the trade union struggle, without nurturing any illusions about reconciling with the neo-liberal globalisation. The CTB acts through the TUI - Trade Unions International in the following sectors: Energy, Metal and Mining, Construction, Education, Transports, Agriculture and Financial Services.

THE STRUGGLE AGAINST DISCRIMINATION

The CTB condemns prejudice, discrimination and any related forms of intolerance, including colour, race, ethnicity, religion, origin, generation, social class, gender or sexual orientation. We will fight vigorously for a society completely free from male supremacy, class domination, racism, misogyny, homophobia, xenophobia, and violence against woman, evils stimulated by capitalism that sully and weaken the ideals of equality and social justice in the Brazilian society.

FOR THE INTEGRATION OF THE PEOPLES

The defence of the national sovereignty is an essential part of the development project focused on the valorisation of labour. In the present conditions, the CTB understands that sovereignty requires fighting against imperialism, international solidarity with all oppressed nations and peoples, autonomy in conducting economic policies as well as the solidary and democratic peoples’ integration. In Latin America with the FTAA defeat we support the expansion and strengthening of the MERCOSUR - Southern Common Market, UNASUL - Union of South American Nations, CELAC - Community of Latin American and Caribbean States- and ALBA - Bolivarian Alliance for the Peoples of Our America.

THE FLAG OF SOCIALISM

The reason for the labour movement to exist is the century-long struggle against the exploitation of labour by capital. The complete victory of unionism requires an end to exploitation and all kinds of discrimination, the prevalence of equality, social justice, brotherhood and peace among nations. This will only be possible with the overthrow of capitalism and the construction of a new social system: Socialism. We support a Socialism based on the sovereignty and the valorisation of the working class, with the colours and face of Brazil. 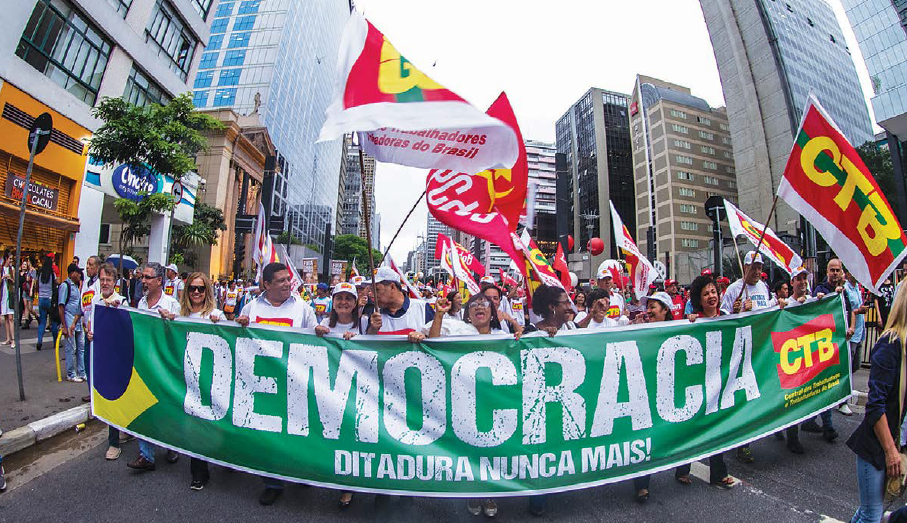 The CTB fights for a new national development project where sovereignty and valorization of labour would prevail, a strategic project with the following struggle banners: