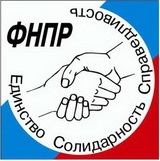 The Federation of Independent Trade Unions of Russia (FNPR) was founded in 1990 as a national trade union centre independent of state, political or business structures.

The FNPR is the largest trade union federation in Russia uniting 122 affiliates: 42 national branch unions and 80 territorial associations of trade union organisations. Trade unions affiliated with the FNPR comprise over 20 million members, which accounts for about 95 percent of all organised workers in Russia.

The FNPR programme "Decent Work as the Basis of Human Well-Being and Development of the Country" was adopted in 2015 at the IXth FNPR Congress. Its key points include the establishment of decent wages in Russia, ensuring employment and safe working conditions, equitable pension system, state social safeguards; creating conditions for the harmonious development of personality.

The FNPR is involved in drafting laws and procedures relating to social and labour spheres, observance of human and trade union rights; it has been actively influencing the process of improving the Russian legislation, particularly through its representatives in the State Duma (the lower chamber of Parliament).

In the recent past the FNPR has made a significant contribution to the improvement of the Russian Labour Code by actively promoting the adoption of the Agency Work Prohibition Law and ratification of several ILO conventions, namely Tripartite Consultation (International Labour Standards) Convention, 1976 (No. 144); Holidays with Pay Convention (Revised), 1970 (No. 132); Workers' Representatives Convention, 1971 (No. 135); Paid Educational Leave Convention, 1974 (No. 140); Collective Bargaining Convention, 1981 (No. 154); Protection of Workers' Claims (Employer's Insolvency) Convention, 1992 (No. 173), as well as the enactment of a number of other laws.

Legal services of the FNPR and its affiliates have been consistently involved in court hearings concerning the resolution of labour disputes and conflicts. Every year, the courts review 14-15 thousand such cases with over 90 percent of the decisions taken in favour of employees.

The FNPR has set its strategic course for full implementation of the social partnership mechanism. It is based on the principle of signing collective bargaining agreements at the enterprise level, as well as sectoral and regional tripartite agreements.

The FNPR has been playing the leading role in the activity of the trade union side of the Russian Tripartite Commission on the Regulation of Social and Labour Relations (RTC). The Commission’s work results in regular signing of the General Agreements between the All-Russian trade union associations, the All-Russian associations of employers and the Government of the Russian Federation.

The FNPR and its affiliates have been persistently looking for ways to promote the union members’ interests in the process of collective bargaining, resorting to collective actions when necessary. Millions of union members have taken part in mass public actions organised by the FNPR, including annual May Day demonstrations, putting their pressing demands to employers and state authorities. Every year, up to 150 major labour disputes arise and get settled in various sectors of the Russian economy.

Since 2008, the FNPR has been actively involved in marking the World Day for Decent Work by holding mass actions every October 7 with the support of its membership.

The IXth FNPR Congress held in 2015 adopted a series of resolutions aimed at wage growth, job security, decent pensions, as well as strengthening internal organisation and improving the efficiency of Russian trade unions.

The FNPR has a well-developed system of trade union education. It includes two higher education institutions – the Academy of Labour and Social Relations (ATISO) in Moscow and St. Petersburg Humanitarian University of Trade Unions with an extensive network of affiliated institutions functioning in many regions across Russia, as well as the Institute of Trade Union Movement under the ATISO and 41 training and methodology centres of trade unions.

The FNPR information network includes 21 television and radio programmes, as well as 115 websites.

The official press organ of the FNPR is Solidarity weekly newspaper, the official website is www.fnpr.ru.

The FNPR is actively cooperating with the International Labour Organisation (ILO).

The FNPR maintains friendly relations with over a hundred national trade union centres in 70 countries of the world. It is the largest affiliated organisation of the International Trade Union Confederation (ITUC) which represents 181 million workers in 163 countries and territories and has 340 national affiliates. The FNPR President is a Vice-President of the ITUC and a member of its Executive Bureau.

The FNPR is a member of the Pan-European Regional Council of the ITUC which brings together trade union centres in new independent states of Europe and the CIS. The FNPR President is a Vice-President of PERC-ITUC.

The FNPR is also affiliated with the General Confederation of Trade Unions (GCTU), uniting trade union federations in most of the former Soviet republics. Mikhail Shmakov was elected Vice-president of the GCTU.

While preserving and augmenting more than century-old traditions of Russian labour and trade union movement, the FNPR has been actively advocating legitimate rights and interests of the union members, all people of Russia, rightfully playing a key role in the civil society as the largest public organisation in the Russian Federation.